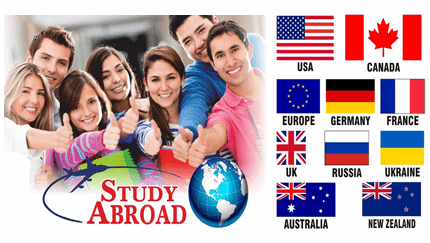 The USA is a country of comprehensive facilities and perspectives. Thousands of universities, dozens of thousands of colleagues are open to international students, and all too often are the best in the world. One of the plus sides of education in the USA is the fact that there is an endless choice of specialties, the ability to form a program of studies by oneself, with a slope of practical training, different scholarships for foreign students. Higher education in the USA is paid and expensive though. Its cost varies in accordance with a chosen university and specialty. Moreover, the difference can be large enough. The cheapest one is a 2-year or a community colleague starting from $17 000 per year (including living, food, insurance, books, and transport). If to speak about universities, the cost of studies starts from $ 30 000 (including living).

Some educational programs cost more (medicine, IT, business courses). As a rule, a cost for 1 semester (in some cases a year) should be paid in full and semester after semester afterward.

The system of higher education in Canada takes second place in the world after the USA. However, Canada is safer, calmer, and cheaper than its southern neighbor is.

Now, about 200 colleagues and technical institutes form part of more than one hundred universities taking on studying after secondary school up to one million students per year. University payment makes only 11% of all the expenses for higher education in Canada, the rest is financed by the government. More than half of a million people take a full-time course. What is more, the number of students in different universities vary from 1000 to 35000 people. More than half are women.

The cost of living in Canada is cheaper than in the USA so it makes it to where education is cheaper too, two-three times cheaper. The immigration policy of Canada is based on the current needs of certain specialists on the labor market, which is a foreigner who graduated from a Canadian university has more chances to find a job and to stay in the country forever. There are programs for students popular in Canada combining theoretical studies with practical training.

Bologna process is on the basis of higher education in Germany. Education more often than not consists of two levels: baccalaureate and master course. There is no such division on stages, for example, legal studies so there are state exams in the end. Getting a higher education, two types of master courses are available for a student, connected and not connected with the baccalaureate. But far from each university provides with both types of the master course. As long as there are no entrance exams, German schoolchildren enter university after finishing 13-year gymnasium and receiving an average grade passing exams on basic school subjects. The number of pieces in German universities is limited not for every faculty. Thus, for the most required directions such as informatics, engineering, anybody who wants to is to be accepted. There is no contest for narrow focus specialized and not so popular faculties as History of Asian and African Countries, classical philology, and others. There is a quota for all the other faculties. An average grade is the main criterion of estimation. There is also a contest based on Wartesemester when a certain number of semesters is established during which a school leaver does not study in the university but works as a volunteer, a nanny, or travels. S/he becomes a student afterward but the average grade remains the same.

To be a student of German university means to have a strong motivation and high level of self-discipline as long as higher education in Germany is based on the independence of those who study, a huge volume of material to learn, choosing what to learn/course to take, registration for exams, search for a place for practice.

Australian higher education is based on the British system of education. Along with a high level of academic training, special attention is paid to the development of exploratory activity and professional skills. The list of special programs is oriented on the labor-market needs, which makes it to where those who graduate from Australian universities to be in demand among employers.

There are 39 universities among which 37 are state ones and the rest 2 are private ones. Higher education in Australia is a great opportunity to get a universal diploma, which means a diploma combining several specialties, which a student was able to obtain during studies.

Among the prestige directions, the following are considered to be worth mentioning:

Today, 12, 6% of students in Australia are foreign students, which is more than in any other European country. Education in Australia is first-rate, there are both deep theoretical knowledge and active development of necessary skills for future professions, an ability for creative thinking, to analyze and structure information plus a guarantee to get a job. Australian diploma is highly praised in universities of other countries.

About the author: Melisa Marzett who is currently writing for my writing help is brilliant when it comes to writing because this is what she loves doing and if you like doing something, it always comes up brilliantly.