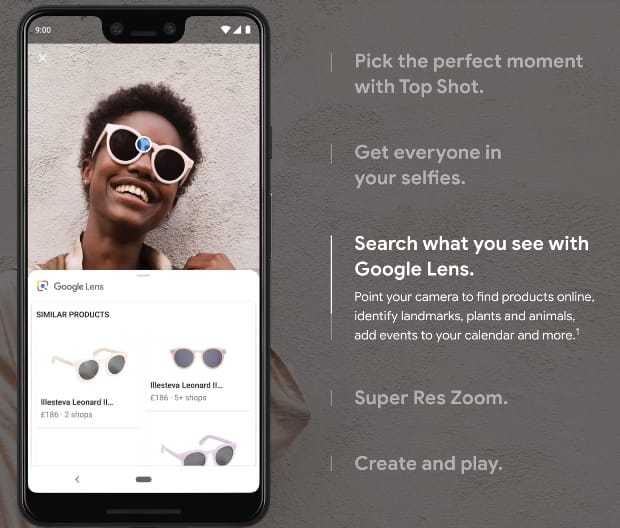 A major announcement in the segment of smartphones, Google Pixel 3, ensures you never have a dull moment with its various features. Everything you can think of, from an immersive display to a powerful battery, this phone has it all. Released in October 2018, the Google Pixel 3 remains to be one of the best in the market.

Smooth and luxurious in hand, Google Pixel 3 is premium in design. Relatively small by modern standards, the phone has a 5.5-inch FHD+ OLED screen with 443 PPI.

The back has a two-tone glass setting with a continuous slab of Corning Gorilla Glass 5, where one of the sections is etched while the other polished.

The etched sections make it super smooth to hold while the polished glass aids a firm grip and does not make it oily on the hands.

Google has replaced the old school home and overviews navigation buttons with a pill-shaped gesture button in the middle and a small black back arrow on the left.

The fingerprint scanner is placed just below the glossy panel in the center of the back.

Exactly how we wish smartphones to look and feel, the Google Pixel 3 stacks them all in this handset.

The Pixel 3 comes with one of the top-end octa-core Qualcomm Snapdragon 845 processors but has 4 GB RAM for less than that the other giants in the industry offer.

However, this does not compromise the smooth operation and top-notch performance of the phone.

It also has one of the best cameras in the market today, which is both simple and familiar.

It comes with a 12-megapixel rear camera that uses the Google HDR+ algorithms to deliver flawless and crisp pictures.

The Night Sight and Portrait mode enable you to better bring out the actual color of the images, even in low light areas.

The front of the Google Pixel 3 adorns two selfie cameras.

It is a standard 8-mega pixel camera which is joined with a wide-angle fixed focus camera that lets you fit more people in a picture. It also has heavenly motion autofocus, where it focuses on any object you tap even while you move.

The adaptive battery technology of the phone learns the usage patterns and limits the power to the apps, which are not usually used; thus, saving battery for the more used ones.

The 18w fast charger takes about 101 minutes to charge the device entirely. You can also charge this phone on the top wirelessly up to 10w using the Pixel Stand, which can further turn the phone into a Google Assistant smart display.

All in all, Google Pixel 3 can be summed up to be one of the refined versions of Google smartphones making an entry in the big leagues.