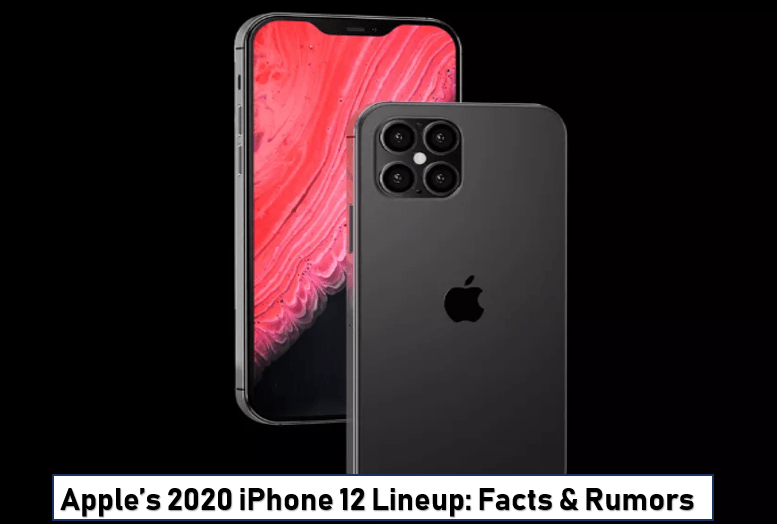 If you’ve not been living under a rock for quite a while now, chances are that you might have heard rumors about Apple’s next lineup of phones is set to take place in September 2020. Although the launch is many months away, there is so much more hype and tons of updates about upcoming devices. We could not be more excited to share everything with you.

Before the final unveiling, we have a hunch that the possible monikers could be iPhone 12, iPhone 12 Pro, and iPhone 12 Pro Max, if Apple follows the same nomenclature as in iPhone 11.

The 2020 iPhones will highlight significant updates, with an incremental overhaul in design and display. There are more intriguing details about iPhone 12 which could prove it to be the real game-changer. Read on to know facts and rumors about iPhone 12.

Features at a Glance

Be mindful of the new iPhone 12 revamped designs as the rumors are that Apple will be adopting the same metal frame for iPhone 12 as in iPhone 4.

One of the popular iPhone analysts Ming-Chi Kuo published in his report guaranteeing the iPhone 12 will have a metal frame, much like the iPhone 4 presented about 10 years earlier. He stated: “The metal frame and the front and back 2/2.5D glass are still used, but the metal frame surface will be changed to a similar design to the iPhone 4, replacing the current surface design.”

Benjamin Geskin, who thinks about a lot of phone renders subject to bits and pieces of rumors, has put out a render of a 6.7-inch iPhone. The new iPhone 12 is expected to drop the notch and rather features the iPhone’s TrueDepth camera parts inside a thin bezel.

Bits of rumors also suggest that the 5.4 and 6.7-inch iPhones will be towards the high-end OLED devices. On the same edge, Apple also proceeds to offer a lower-end 6.1-inch with the same OLED display. This is going to be an out-of-this-world feature.

According to the tipsters; after the 4.7-inch iPhone 8 display, the iPhone 12 Pro with 5.4 inches would be the tiniest iPhone. And the 2020 iPhone 12 Pro Max at 6.7-inches will be Apple’s biggest iPhone to date.

Since Apple is expected to launch the most-awaited iPhone 12 with 5G so it is taking a stab in a different way. Starting from the iPhone 11, which started off with really humble beginnings at $699, the iPhone 11 Pro and iPhone 11 Pro Max cost $999 and $1,099 respectively.

Most 5G-enabled devices that step up in 2019 are assessed at a premium price as compared to the standard models. The Galaxy S10 5G, for example, starts at $1,299 — a $300 premium over the adequately costly Galaxy S10+.

A recent release of Galaxy Note 10 Plus 5G furthermore with flagship price at $1,299, which is $200 more than the customary Note 10 Plus.

Apple’s chipmaker TSMC revealed that it is on course to deliver 5-nanometer chips for Apple’s 2020 lineup. A14 chips that will be manufactured with 5nm will be faster, efficient, and powerful.

5G enabled smartphones have been the talk of the town in 2019. The majority of Apple’s close rivals such as Samsung, LG, Oppo & Huawei have pioneered in 5G compatible devices. While the Cupertino-based tech giant fell behind on the 5G front. It seems as if the wait of iPhone lovers is going to be over now. Rumors have unequivocally stated that the iPhone 12 will be the first of its kind to offer full 5G support. So now, the iPhone transfer is going to be much easier.

According to another iPhone leaker Ice Universe, Apple is going to launch a new iPhone 12 with much more smooth, battery-saving, and variable refresh rates between 60Hz / 120Hz. The new trend in refresh rates will enhance gaming and video experience. It will also improve UI for common iPhone users.

In 2019 iPhone 11 variants, Apple rolled out significant improvements to the rear camera system with the new triple-lens of the iPhone 11 Pro and Pro Max, and 2020 may bring much more camera upgrades.

A few famous leaks also stated that Apple will launch a laser-powered time-of-flight 3D back camera in the iPhone 12. In this way, Apple will acquire a noteworthy edge on augmented reality experiences.

A time-of-flight (ToF) camera framework utilizes a laser to figure the time that it takes for the laser to bob off of things in a room. It then utilizes the information to make an exact 3D image of the encompassing zone. It will boost the photos with depth capturing.

The camera is said to have the option to check zones up to 15 feet from the handset. Apple’s front-sided True-Depth camera uses 3D technology but since it comes with infrared and not laser-powered, it works when the distance is 25 to 50 cm.

This is one of the greatest wishes of iPhone users that Apple may launch iPhone 12 with USB Type-C charges or a wireless charging system. We’re excited to reveal that now the users can expect faster charging as much as 50W. On the other hand, Androids had all been using USB Type-C for a few years now.

iPhone 11 is still piping hot from the oven but we have given you a heads up. Apple is likely to launch the iPhone 12 in the second week of September 2020. We’ve shepherded most of the upcoming features that you could possibly enjoy. What else can we see? Let’s wait for the 2020 Apple event and mark your calendars!